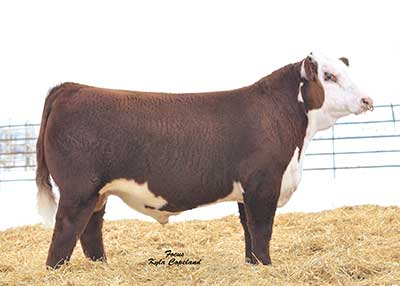 American made created quite a buzz in Denver at the NWSS while on display at Coyote Ridge Ranch's Hereford Pen. Admired for his stoutness, pigment and huge hip he was one of the most popular bulls in Denver along with his other 7 half-brothers. We selected American Made while he was being showed at the American Royal and thankfully we did!!
His other brothers were all sold to leading Hereford breeders and AI Studs while in Denver.
WE really like the number profile, cow he's out of and his 40 cm scrotal at 11 months of age.
Most important though was this spring he was turned out with 36 heifers to breed naturally. He settled 35/36 of the heifers and 34/35 bred will be calving the first two weeks in February, quite a feat for a yearling bull turned out in a 300 acre pasture!!! He's a breeding bull!!!!
Semen available from Cattle Visions.